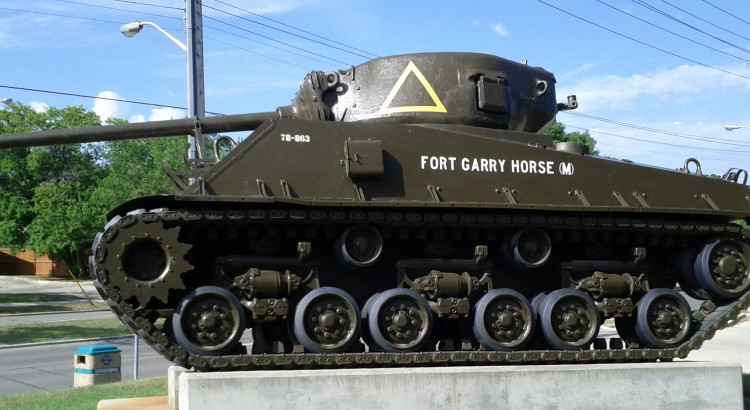 History of the Tank

One of 2915 of this particular model built between May 1944 and May 1945, it was intended for
delivery to Russia under the Lend-Lease program, but the shipment was cancelled at the end of
the European war in May of 1945. This is one of the last models of Sherman tank built. A total of
49,243 of all versions were built from 1942-1945.

The Canadian Army had used earlier versions of the Sherman than in Italy and North-West
Europe from 1943, but all these tanks were disposed of in Europe at the end of the war.

In 1946, to equip the post-war Canadian Army, 300 M4A2 Shermans were purchased from the
USA at a cost of $1,460 each. They served with the Regular force until the adoption of the
Centurion tank in 1958 and Militia unit the last ones were retired in 1970. A number of them
became range targets and several become monuments such as this one. A few have been restored
to running condition in private ownership.

The vehicle carries the marking of The Fort Garry Horse (Militia) for the period 1946-1959.

Arm of Service Sign The left front and left rear carry the arm of service sign of the Royal
Canadian Armoured Corps. A square with read and yellow halves, divided diagonally. Above, a
2-inch white bar carries the unit’s abbreviated name “FGH (M)”

Unit Name. In the mid-1950’s the unit name in the form “FORT GARRY HORSE (M)” was
added to the sides of the vehicles located in Winnipeg for recruiting purposes.

Turret Markings. A yellow triangle on the turret indicated “A” Squadron of the regiment. A
square was used to indicate B Squadron, a Circle for C Squadron, and a Diamond for D
Squadron.

It takes two gallons to paint the entire vehicle with a professional spray gun and compressor.
Thin the paint with Synthetic Enamel reducer, ratio Paint: Reducer 2:1

The Fort Garry Horse was formed in Winnipeg on April 15th 1912. The new unit quickly
filled its ranks and began to receive equipment and train as sword and rifle armed cavalry.

On the outbreak of the First World War in 1914, the regiment was mobilized and moved to
Valcartier, Quebec. There it was combined with other Western Cavalry Regiments to form the
6th Battalion C.E.F. (Canadian Expeditionary Force). The 6th Battalion sailed for England in
October 1914, and trained there as Infantry throughout the remainder of the year.

In 1915, the Canadian Cavalry Brigade was formed and the 6th Battalion was converted back to
Cavalry under the name Fort Garry Horse. Crossing over to France, the Regiment took part in
many actions, acting as Cavalry and relieving Infantry in the trenches throughout 1916 and
1917. In November 1917, as part of the famous tank attack on Cambrai, “B” Squadron of the
Garrys distinguished itself in the Cavalry role. Lt. Harcus Strachan was awarded the Empire’s
highest honour, the Victoria Cross, for this action.

The Garrys continued to serve in the Canadian Cavalry Brigade, taking part in the important
actions of Moreuil and Rifle Wood in March and April 1918. In October 1918, the Regiment
took part in the battle of Gattigny Wood, members earning 21 decorations for this action. After
the war ended in November 1918, the Regiment did a short period of garrison duty in Belgium
and came home to Winnipeg in 1919.

After demobilization, as a unit in the N.P.A.M. (Non-Permanent Active Militia) the Regiment
continued to soldier on throughout the 20’s and 30’s keeping standards and traditions alive.
At the beginning of the Second World War, the Garrys were mobilized and converted from
Cavalry to Armour. After basic tank training in Canada, the Regiment sailed for England where
they continued to train for the planned invasion of Europe.

The Garrys were among the first to land in Normandy on “D-Day”, June 6th 1944. Special
floating “Duplex Drive” Sherman tanks were used for the D-Day landings. The Garrys were part
of the Vanguard of the Canadian Army as they pushed through France, Belgium and Holland
into Germany and fought successfully in many actions earning 16 Battle Honours.

After the War, the Militia carried on as they had between the wars. In 1953, volunteers from the
Garrys served in the Korean War as First Troop “A” Squadron of Lord Strathcona’s Horse.
Many members of the Garrys have served in United Nations missions in the Sinai, Cyprus,
Egypt, the Golan Heights, and the former Yugoslavia.

In 1958, a Regular Force component of the Garrys was formed in Petawawa, Ontario. The unit
served in Germany and was later based in Calgary. Several sub-units took part in UN missions
in the Sinai and Cyprus. The Regular component was de-activated in 1970.

The Garrys have served in the Reconnaissance role since 1969. Members train in “Recce”
driving and tactics, weapons, navigation, and communications. Some serve as clerks, cooks,
technicians and other support trades. Services to the community have included flood fighting,
assistance in blizzards, and the yearly tradition of delivering Christmas Cheer hampers.

All Garrys, past and present, are members of the Regimental family. They can be proud of their
long list of accomplishments and of their Regimental motto:

The tank in service with The Fort Garry Horse, 1959.

The tank prior to re-painting. The colour is modern NATO Forest Green

The crew-commander’s cupola. Covers were made for the missing periscopes and vision blocks

The tank with rust paint applied, prior to painting with 24087

Looking down inside the turret, gunner’s position

Looking down at location of commander’s position

The first M4 Sherman tanks entered service with the U.S. Army in 1941. They were also
adopted and extensively used by British and Canadian forces during World War II and
continued in use through the Korean War. The Sherman went through many
improvements and upgrades during its service career, ending with this model,
manufactured in 1945, incorporating many changes learned from wartime experience.
The last Shermans were retired from Canadian service in 1970. Some Shermans
continue to serve today in Israel as armoured ambulances and chassis for self propelled
artillery and mortars.

No. 19 radio set A and B set combined, VHF and HF, voice and CW (Morse)
transmission
Intercom Headset and handset for each crew member.

Grenades: 12 8 in box under commanders seat
4 in rack below radio set